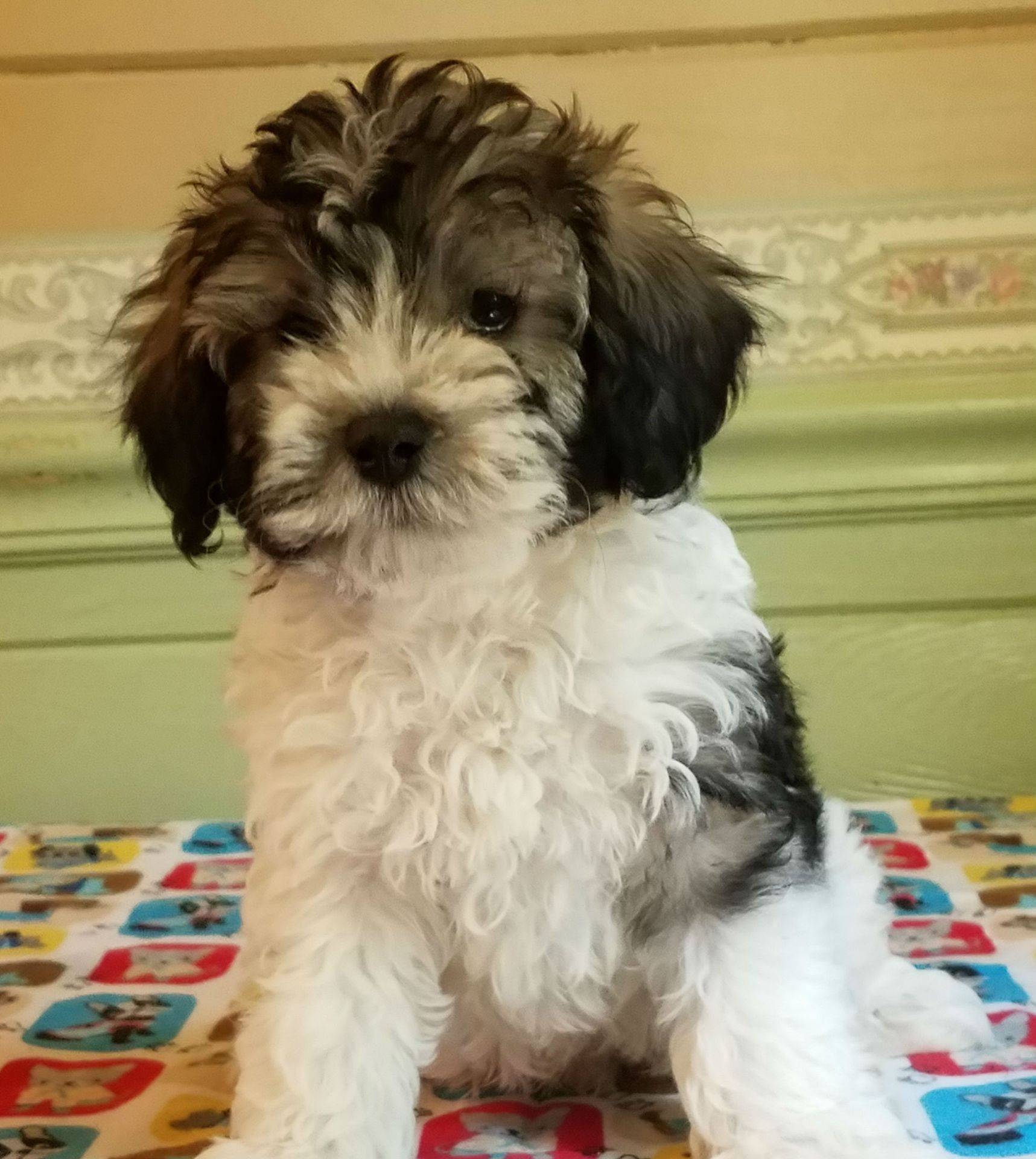 The Miniature Poodle:
The Poodle is regarded as one of the most intelligent breeds of dog. The poodle breed is found officially, in toy, miniature and standard sizes, and in many coat colors. Originally bred as a, type of water dog the poodle is skillful in many dog sports , including agility, obedience, tracking, and even herding
Miniature:
Weight: 15-17 poundsHeight: 11 - 15 inches (shoulder/wither)Traits:    * Well-groomed, curly coat    * Elegant and regal    * Adaptable and easygoing    * Loving and friendly    * Protective

:
Miniature poodles are clever and lively household companions, adaptable to their environments and are fairly easy to train/ Its no surprise that they were once very popular circus dogs. Overall, they are amusing, eager to please and a lot of fun to be around.

Poodles are generally active and agile. They are happiest with daily walks and lots of outdoor play. Without enough attention and activity, they can get bored, agitated, restless and (sometimes) destructive. Also, if you can give your Poodle the opportunity to frolic in water, by all means do.

Poodles do not like to be left alone for hours on end. They love being around people and are able to form bonds with each member of the family, as opposed to bonding with just one person. Poodles are ideal family dogs, being both patient and playful with children. They also make superb watchdogs, barking zealously when strangers approach the home.

Things You Should Know

Poodles may look dainty and demur, but in truth, these are high-stamina dogs with a stellar range of skills, including agility and obedience. Your pretty Poodle could be a sporty competitor in addition to a beautiful show dog.

As a Miniature Poodle owner, you must be ready to groom: They need to be clipped and bathed regularly. On the plus side, they dont shed.

Miniature Poodles can live as long as 15 years. Though a relatively healthy breed, common issues can include hip dysplasia, allergies, skin conditions, ear infections and cataracts.

:
Though Poodles have lived in Europe for centuries, no one knows for sure where they originated. Some claim Germany, but the consensus seems to be France, where they are considered a beloved national breed. Descended from the now-obsolete French Water Dog, the Poodle (most likely named from the German word Pudel, or plays in water) was used to retrieve waterfowl for hunters. Poodles were prized for their intelligence and good manners, eventually being used in circuses and dog shows and, of course, as companions. The Standard Poodle is believed to be the oldest of the three Poodle versions. Miniature Poodles and Toy Poodles were most likely bred from the larger Standard Poodles, but all three are judged in the same categories.

The Look of the Miniature Poodle

:
The Miniature Poodle has a graceful, small- to medium-sized frame with a rounded skull, a long head and muzzle, dark oval eyes and wide, close-hanging ears. They have docked tails (usually) and compact, webbed feet. The coat is sometimes curly, sometimes corded or ribbed, and can be any solid color. Grooming styles include the pet clip (short all over), the Continental clip (the hindquarters shaved, half of the tail and the upper half of the legs) English saddle clip (same as the Continental Clip except the hindquarters are not shaved). Most show dogs appear with the Continental Clip.

Most poodles have a dense, curly, non-shedding coat that requires regular grooming. Since poodles do not have the plush double coat of many breeds their fur is often referred to as "hair", a term usually reserved for humans. Most poodles are solid-colored, and many registries allow only solid colors in conformation shows. "Parti" (short for parti-colored) poodles have large patches of colors different from the main body color. "Phantom" poodles have the color pattern of a black-and-tan dog, although not necessarily black and tan. Solid-colored poodles may either "hold" their color (i.e., stay more or less the same throughout their lives) or "fade" or "clear" to a lighter shade. Usually the ears and the thicker guard hairs hold more of the original color than other hair.

The tail is usually poofy, often docked in the US and less often in Europe; the practice is illegal in the UK and Australia. Tails, when docked, are left much longer than in the past. Poodles have drop ears which are never cropped.

The Poodle, though often equated to the beauty with no brains, is exceptionally smart, active and excels in obedience training. Poodles like to be in the center of things and are easily trained to do astonishing tricks involving both brains and agility. They have performed in circuses for centuries, beginning in Europe, and have been part of the Ringling Circus in its various forms from its inception. The Grimaldis, the famous British clowns Kenneth and Audrey Austin, "developed a stronger circus act" with a clever Poodle named 'Twinkle,' the success of which allowed them to continue performing even as octogenarians."

Poodles are extremely people-oriented dogs and generally eager to please.  Poodles are adaptable and easy to train. Like most dogs, they appreciate daily exercise, such as a walk or a play session. Most are fairly agile and athletic.  Toy Poodles will play ball and love to fetch. Play time is vital, but one must be sure that they get plenty of rest following long play periods and that fresh water is available at all times.

Housebreaking can be difficult in many dog breeds, but the poodle is one of the easiest to train. Whether going outside or being trained on a pad, they learn quickly where to defecate. They are still animals, however, and they need time to understand what is desired of them. Poodles are quite smart and learn more quickly than most dogs.

Send to a friend